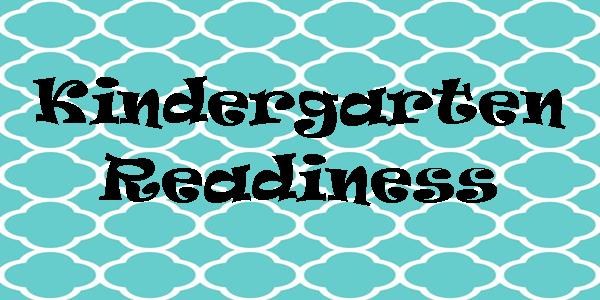 I love to share my KR experience with anyone considering the program.  Two of my 3 children spent a year in KR before starting Kindergarten, and I think it’s one of the best programs Rutherford Co Schools offers.  I spent a great deal of time trying to decide if KR would be the best choice for my oldest daughter, and it was a no brainer for my middle daughter.  She was eligible for KR so, of course, it was the right choice!  Imagine KR as the very best, most solid foundation you could provide for your child.  Most kids are academically ready for Kindergarten, but socially and emotionally Kindergarten can be very stressful.    My kids who were in KR are in 7th and 5th grade now, and this extra year of maturity has benefited them every single year.  KR is one of the best decisions we've made regarding our children's education!

I would also like to tell you about my experience with Mrs. Walker.  She was a volunteer in one of our KR classes and she was instrumental in helping to teach my daughter to read.  Mrs.  Walker loves to teach, she gets excited about learning, and she is a person of integrity.  My kids describe her as “really kind”

-Heather Brand
The KR program has been the biggest blessing thus far in my children's education. All three of my children have been fortunate enough to experience all that KR has to offer. It allows children with those summer birthdays an extra year to grow in maturity, skill sets, and confidence; so that when they do start "Big Kindergarten" they have everything they need and more! My kids favorite year have been KR- it is packed full of fun! The class size is small and the children are able to get lots of hands on and one on one from the teacher! Can not say enough positive things about KR!
-Rachel Blandford
My oldest daughter is naturally a high achiever. She was reading at the age of three and learning has always been natural for her. Also, when entering school, she appeared to be extremely mature. It did not appear that there were reasons she "needed" KR, however, we did not want to pass up the opportunity of another year to grow in leadership, academics, and confidence. I saw it as a luxury, not a necessity.  In KR she grew in every aspect. Her reading level increased, as she became even more mature and confident. She has continued to thrive in school, and is now in the gifted program. We loved the KR program, but we really saw the benefit when she entered third grade. Her own perfectionism and drive became an obstacle for her. She was able to overcome this because she had the maturity to deal with it. KR is the best decision we could have made!
My younger daughter, had more obvious signs of immaturity and lacked confidence entering school. KR was great for her! Now she is thriving in school as well, and is described as a leader and very confident by her teachers. Again, the best decision we have made.
Because of my own children's' experiences, I'm very passionate about this program and teaching each student at their individual level. I feel so blessed to be a part of this amazing opportunity for your child!
-Jennifer Walker
Our Classroom Zoo
The kiddos brought in some animals and we created a Zoo in our classroom!
First we classified, sorted and learned about animals.
At first I let them choose how to sort the animals. One group sorted by tails/no tails, one group sorted by where they lived (in water/out of water), and one group sorted by stripes/no stripes. Pretty smart kiddos, huh?
Then we spent some time sorting by body covering, number of legs, and color
Next, we did some research.
We decided our animals should have signs just like the Nashville Zoo, so we needed to learn a little bit about our animals. Mrs. Barlow got us lots of books, and we ask our book buddies to help us read about  specific animals.
We made our signs, created habitats, and built our zoo!
We made invitations for visitors, and the kiddos even insisted that we make maps.
The Visitors
We had so much fun being zookeepers and guiding our visitors through the zoo! We had lots of classes, Mr. Walker, Coach Hicks, Coach Martin, Mrs. Lapinski, Mrs. Barlow, Mrs. Lisa and Mrs. Tammy from the front office, and even Mrs. Goostree! Mrs. Goostree loved it so much she gave us spirit sticks that said "Your principal is proud of you!" The kiddos felt like the rock stars they are!
Fairy Tale STEM: Can you build a house that can stand up to the Big Bad Wolf?
To continue our Fairy Tale unit the kiddos made houses. Then we brought in the Big Bad Wolf (A.K.A my hair dryer) to see if the houses would stand strong! It was so much fun! I love their little furrowed brows as they are trying to figure out how to make a strong, sturdy house, that stands up.
Learning with fairy tales!
﻿We began our day with fun morning work. Then, we read Billy Goats Gruff and identified the characters and setting. Next,  we paired up and got a mystery bag of materials to construct the setting. Once everyone had constructed their bridges, we took turns retelling the story to the class!
Easter Fun
Morning Work Fun!
If I were president...
Do you like Green Eggs and Ham?
Money Scramble and Sweet Shop!
Ground hog Treats with Book Buddies
100th Day of School Fun!
Our Snowman Science experiment
We started by planning what our snowman would look like. We had to learn to spell the word "My" first. 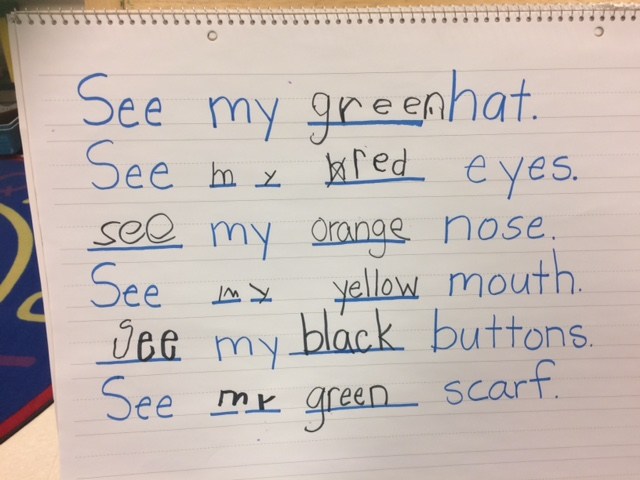 Next, I asked my class a question. (in my best "Anna singing voice"  of course!) "Do you want to build a snowman? We built our snowman out of frozen water balls. Then we observed and recorded what our snowman looked like at the beginning of the day. We also made a hypothesis about what it would like like at the end of the day. 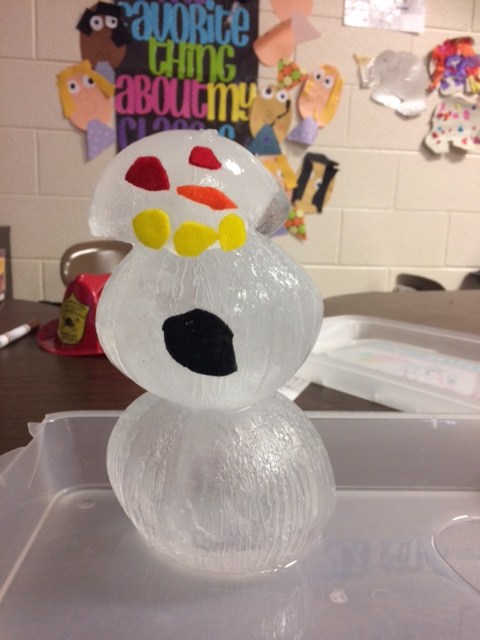 We observed it in the middle of the day and recorded our data. 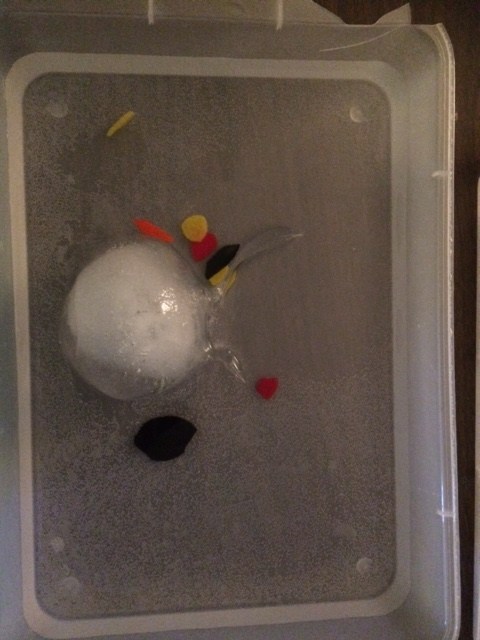 Happy New Year!
We started our New Year back to school by learning about telling time, and counting down the hours of our first school day back! Each hour, we opened the back that matched the time to reveal a surprise. We were learning about the letter Nn so each surprise began with N. We had so much fun! We opened:
New crayons, Number games, Nerds, No shoes,  New Years Celebration, and more!
we had some super fun Morning work last week!
We made Gingerbread Men today! The kiddos had to "purchase" the ingredients from the store. The prices were letters. Their "money" was pictures.  To purchase an item they had have the picture that corresponded with the beginning sound  letter. It was so much fun!
Run, Run as fast as you can! Did you hear about our Gingerbread man?
We worked together to make this Gingerbread Man after reading the story yesterday.

When we go to school this morning, he had left us a note! We worked together to sound out the words and read them! 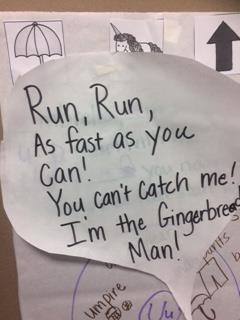 He sent us a message saying that he had some fun, but now he was lost. He sent us this picture.

We made a poster, and hung it up in the school. It worked! Our Book Buddies found him and brought him back to us! 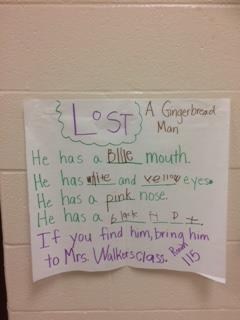 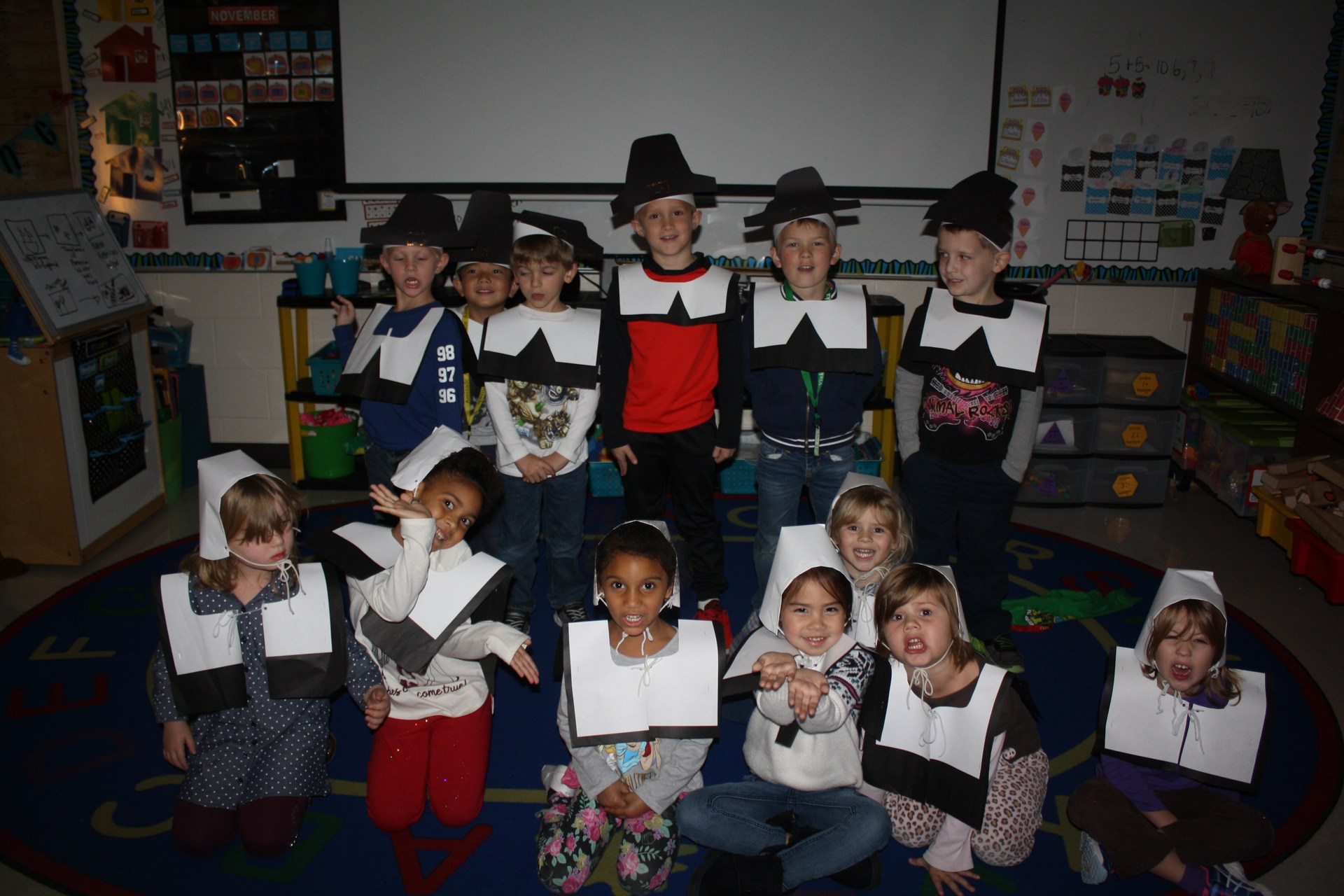 Ready For Thanksgiving Lunch!
50th Day Of KR!!!
F is for Frankenstein!
These cute doctors helped their monster patients by matching upper case and lowercase letters
S is for Super Hero!
O is for octopus!
H is for Horse!
G is for Guinea Pig!
Pete the Cat Fun!

Wear red, white, and blue tomorrow to honor our veterans!

Field trip forms and money are due tomorrow!!!

Just a reminder that tomorrow is fall picture day! Also if you haven't sent in an apple please do so tomorrow. We will begin our investigations. 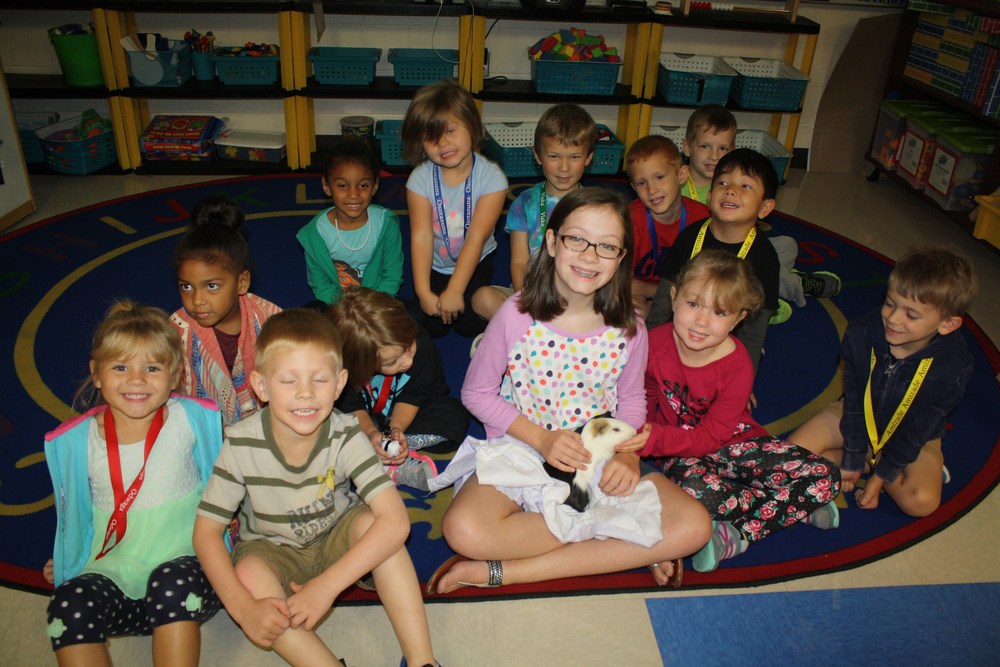 G is for guinea pig! 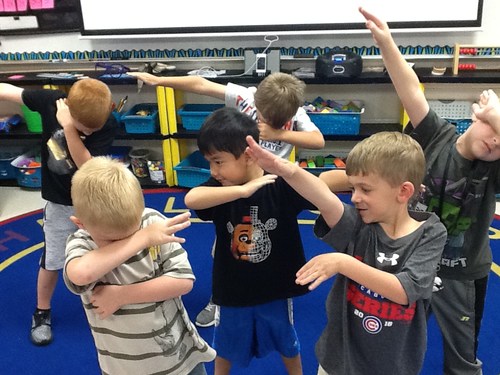 D is for dinosaur!
Click here for the green song that we have been singing this week.
Click here for the Yellow song.
Newsletters are coming home today. Everyone earned Buck Nation tomorrow, so your child can wear a hat and bring $.50 for a snack. If you don't want to purchase a snack, you can send a snack from home.
We had a great day with almost our whole class here! (We missed Stella)  Ask your child to spell RED for you! I'm looking for another great day tomorrow! Wear yellow!
Thank you for coming to parent night! I'm excited to begin this adventure together! It's going to be a great year! 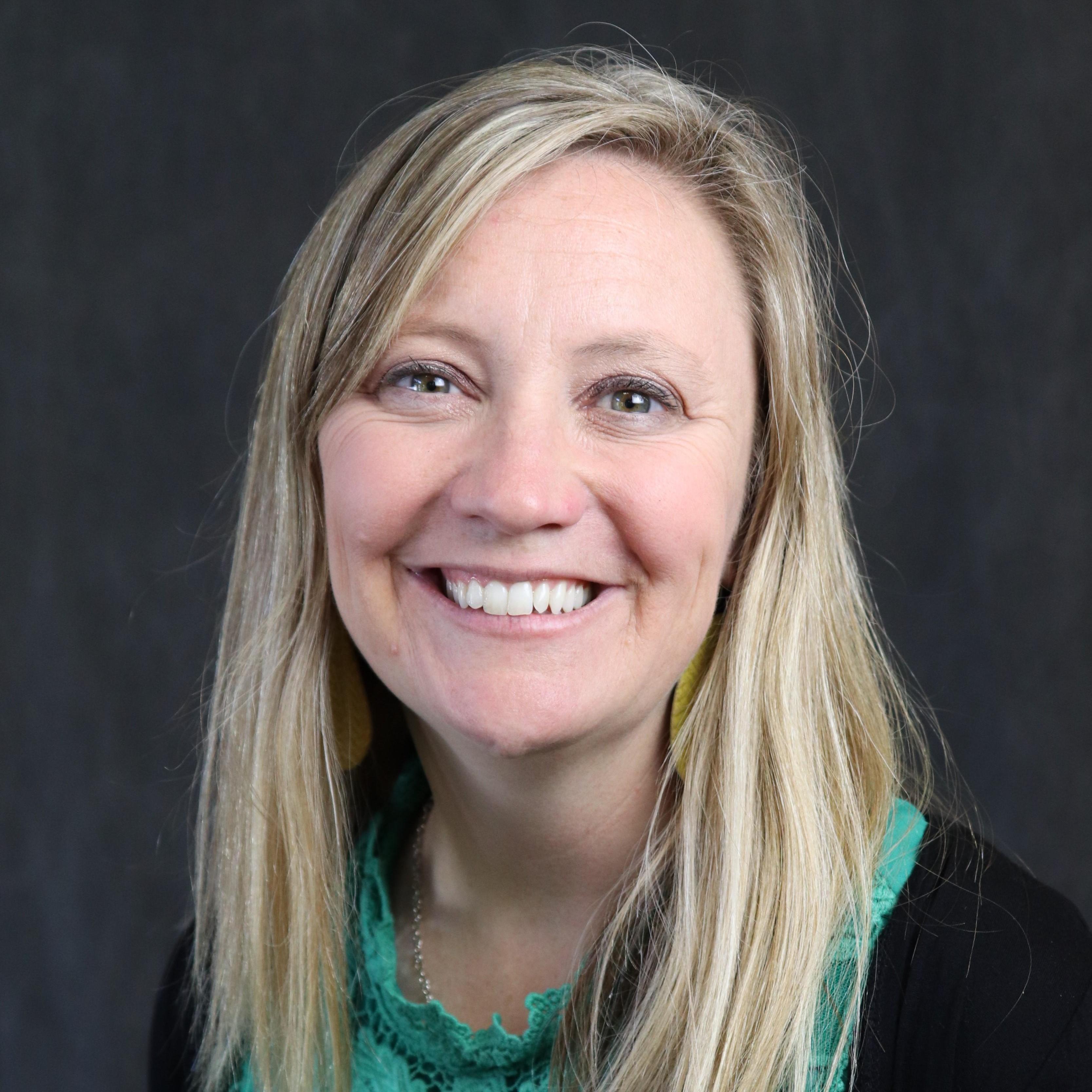